In Gigabit Era, Fixed and Mobile Networks Will Reach 10 Gbps Per Device

In Gigabit Era, Fixed and Mobile Networks Will Reach 10 Gbps Per Device

With gigabit Internet access speeds now shaping the context of the consumer Internet access market, it also should be acknowledged that current development work, historical precedent and competitive markets already suggest that multi-gigabit speeds up to 10 Gbps already are on the standards agenda and product roadmaps for both fixed and wireless networks.
At a time when consumers actually do not have access to applications that require a gigabit, much less 10 Gbps, that might seem an example of pure marketing hyperbole.
What might be shocking is that history suggests 10 Gbps is precisely where we should expect bandwidth to go.
Basically, since the time of dial-up access, we have seen linear increases in bandwidth that very much resemble Moore’s Law. Indeed, some even argue that Internet access bandwidth, in terms of the top marketed speeds for consumers, have increased precisely as Moore’s Law would suggest computing power grows.
What will likely come as a bigger surprise is the improvements we will see with 5G and future mobile generations, where mobile or fixed wireless speeds will reach gigabit ranges (one Gbps up to 10 Gbps) as part of the standards. 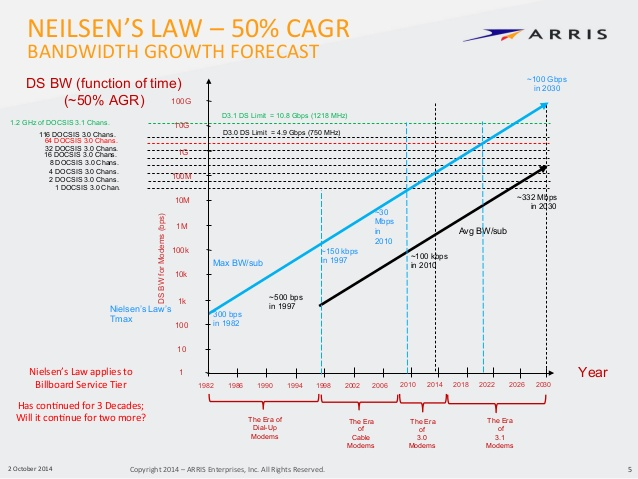 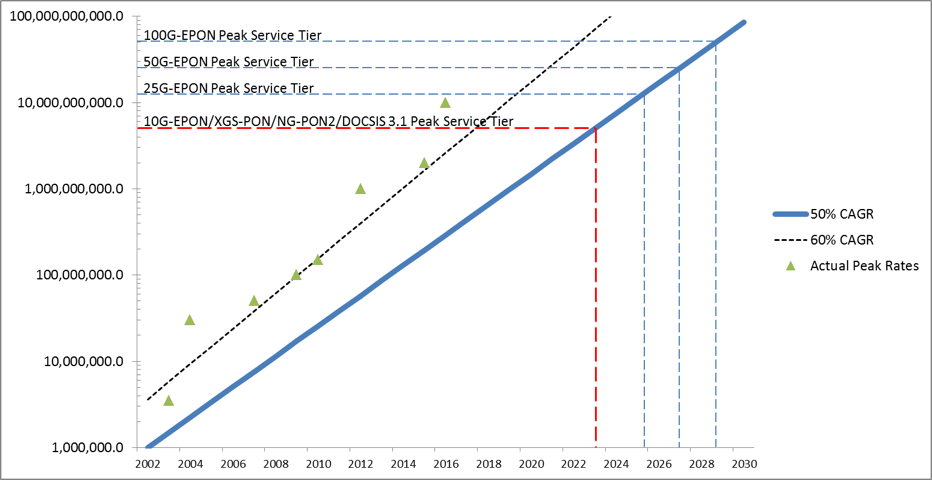 source: Cablelabs
Precisely how all that bandwidth can be provided at prices regular consumers are willing to pay is the issue.
And that is why any number of development initiatives, mobile and fixed, are key. Basically, all the efforts aim to supply gigabit bandwidth on networks that are efficient enough to support consumer price points.
In that regard, much attention now is going into fixed wireless.
AT&T, for example,  is working on “AirGig,” a method for combining fixed wireless with power line transmission for communications, without building towers, laying cables or acquiring new spectrum.
All three of those attributes have the potential to dramatically lower the cost of delivering gigabit services in the access network.
AT&T’s Project AirGig has several key advantages:
At&T expects to conduct field trials in 2017.
Combined with the dominant role of cable TV networks in the access network, and the upgrades to gigabit speeds, serious questions can be asked about whether fiber to the home will continue to be viewed as the “best” way to deliver gigabit Internet access and other services to consumers.
“Project AirGig has tremendous potential to transform internet access globally, well beyond our current broadband footprint and not just in the United States,” said John Donovan, AT&T chief strategy officer.
AT&T says it has more than 100 patents or patent applications supporting this new technology and other access technologies.

“We’re experimenting with multiple ways to send a modulated radio signal around or near medium-voltage power lines,” said Donovan. “There’s no direct electrical connection to the power line required and it has the potential of multi-gigabit speeds in urban, rural and underserved parts of the world.”
Project AirGig is therefore one more potential platform for Internet access and communications that uses fixed wireless.
As part of Project AirGig, AT&T Labs invented low-cost plastic antennas and devices located along the power line to re-generate millimeter wave (mmWave) signals that can be used for 4G LTE and 5G multi-gigabit mobile and fixed deployments.
“These patent-pending devices can mean low hardware and deployment costs while maintaining the highest signal quality,” said Donovan.
Also,  5G standards will include multi-gigabit speeds, and the cable TV industry already envisions 10 Gbps service. Nokia already has demonstrated 10 Gbps symmetrical speeds on hybrid fiber coax, supporting the CableLabs “full duplex” version of DOCSIS 3.1.
All that illustrates a principle: advertised Internet speeds are mostly about marketing, at this point, not “need.” The clearest use case for most accounts is that multiple users in a family or household watch lots of high-definition format streaming video simultaneously.
Generously allocating 10 Mbps per stream would mean a need for 70 Mbps for seven simultaneous HDTV streams.
Some users running servers out of their homes plausibly need similar levels of bandwidth. But the average consumer arguably needs nowhere near 100 Mbps.
A reasonable 2015 analysis of functional need, per user, might have looked something like this:
The fundamental point is that we now are in a phase of development where end user need does not drive bandwidth growth. Suppliers and apps are pushing the trends.

enough already information about In Gigabit Era, Fixed and Mobile Networks Will Reach 10 Gbps Per Device

Related : In Gigabit Era, Fixed and Mobile Networks Will Reach 10 Gbps Per Device